Check out the photos of Ecuador and Peru. I upload new photos almost every day. I spent about 2 months and 1 week traveling through Ecuador, I visited 31 towns/cities. I am now in Moyobamba, Peru. I will spend at least a week here, probably up to 2 weeks, resting from all the walking this past month and a half, since leaving Colombia.

Piura, Peru: (San Miguel de Piura) Population: I've seen numbers range from 155,000 (the city itself in 2017) to around 450,000 (the entire province). Piura is a small city on the northern Pacific coast of Peru, in the Sechura Desert. Therefore, it sits at only 15 meters elevation on average. The Spanish name of the city, Piura, comes from the indigenous Quechuan word pirhua, which means "abundance". But, now the city is known as "Ciudad del eterno calor" or "The city of eternal heat" because it's hot all year round. I think it should be called "The city of endless sand" because you can't get away from the sand, anywhere.

Talara, Peru: Population: around 125,000. Talara is a small city on the nothern Pacific coast of Peru. Therefore, it sits at only 15 meters elevation on average. The town sits mostly at or near beach level and is surrounded by brown desert cliffs, on top of which is a military base and the main road out to the PanAmericana Highway. Talara is an oil town. They have a refinery and the landscape outside the city is dotted with oil well pumps and many pipes snake their way across the dusty desert. And, when I say dusty desert, it's not an understatement. This is the northern region of the Atacama Desert, the driest place on earth (further south). Here it does rain, but very rarely. Out in the desert there is no vegetation of any kind, the only trees, bushes and other plants start to appear near the beach and in towns where people have planted them. In 1916, the oil field workers went on strike, and it ended up being a violent strike with four people dead. Finally, the strike ended and the workers got everything they demanded.

Caleta Cruz was designated a district in 1962. In 1532 the conquistador Francisco Pizarro placed a cross, the symbol of the Catholic church, on the hill over the region. Then in 1842 the cross was removed to the Church of La Merced in the town Piura (a little ways south of Caleta Cruz). Then sometime later it was again moved, this time to the National Museum of Archaeology, Anthropology and History of Peru in Lima. There is talk about building a museum at the original site and moving the cross back to its rightful place. In 1926 an oil exploration company came into the area and with their work they also constructed the first actual roads in Caleta Cruz. Prior to these roads the people used only trails to get around the area. Commercial fishing took off after 1946 bringing in more companies.

Corrales, Peru: Population: for the entire metropolitan area, around 26,000.

Corrales was founded in 1871. In case you were wondering, the name Corrales is indeed translated to corrals in English. The name came from the fact that there were corrals for the cattle to milk them and provide milk to all the local people. These corrals were in the middle of what is now the town proper. If a person were leaving to go somewhere another might ask "Where are you going?" and the first might reply, "To the corrals". Over time, they started building houses around the corrals and the name stuck. Eventually, the corrals were converted into the main town center plaza.

Tumbes, Peru: Population: around 115,000. The entire metropolitan area has a population of about 171,000. The town sits at the high elevation of 6 meters (20 feet). Alongside the town runs the Tumbes River. The photo above is a monument to lovers, this is something you'll never see in public in North America.

The origin of the town dates way back to the pre-Inca era when it was inhabited by the Tumpis people. At one point they had a population of about 178,000. Then after the year 1400, the Incas came in and took over the area and made it an important political center. Then a later Inca emperor started the construction of roads, houses, and palaces. The Spanish conquistador Pizzaro conquered the Incas and took over Tumbes in 1532. Then ensued fights over the Tumbes region starting with the Republic of Gran Colombia claiming it, then later Ecuador claimed it, then came the Peru-Ecuador war in 1941-42. Peru eventually won and was given the region of Tumbes. That was a long time in coming, actually, and occurred in 1998. 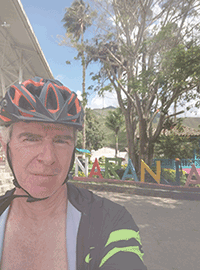 I used to teach English as a foreign language in Barranquilla, Colombia. Now I'm retired and living in Roldanillo, Valle del Cauca, Colombia.
I'm from Kennewick, Washington, USA. In my previous life, as I call it, I was an IT guy, systems administrator, computer tech, as well as a shipping/receiving guy and also worked as a merchandising guy in a RV/Camping store.